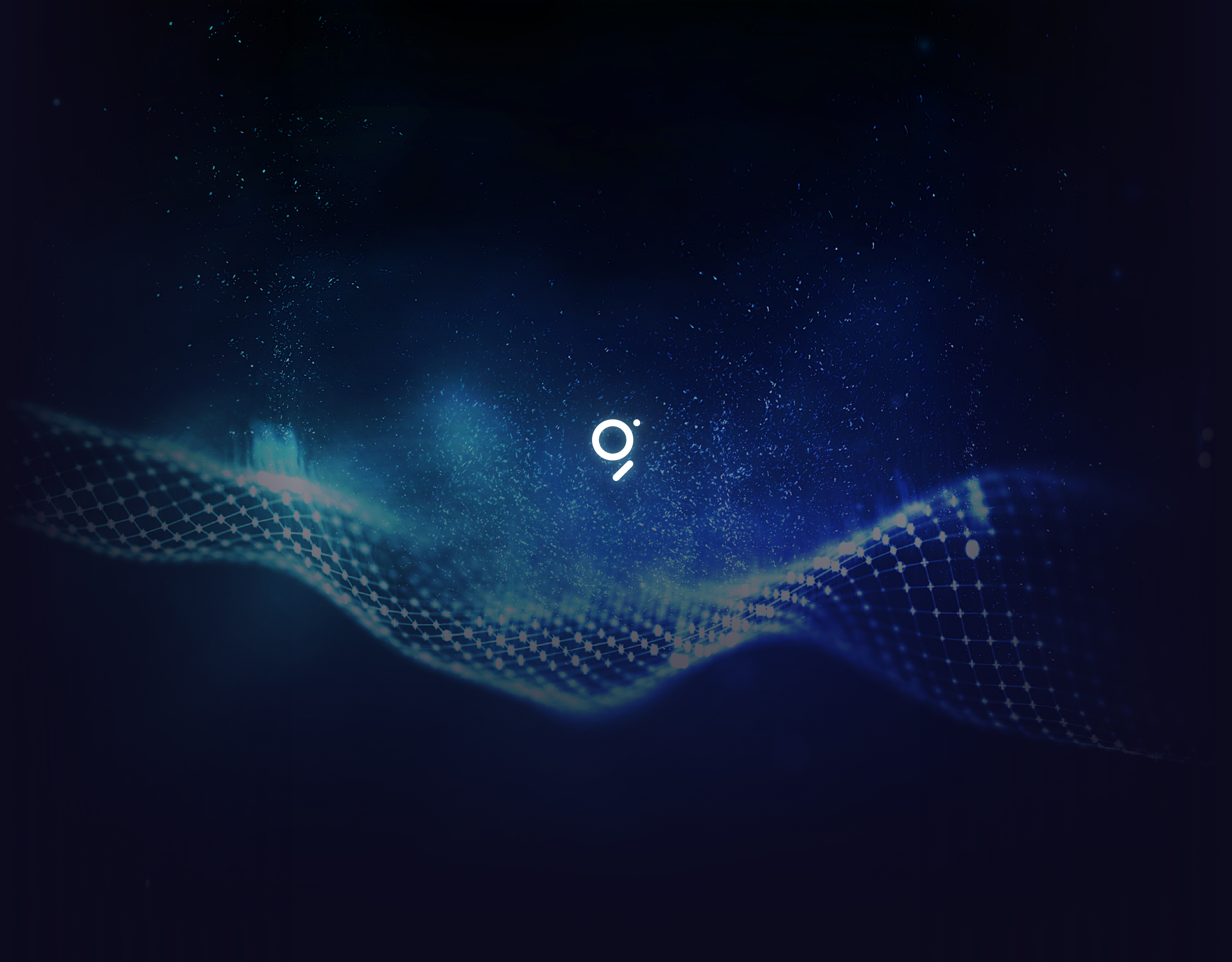 Over the past 3 weeks The Graph has been hosting an online hackathon to build subgraphs for Ethereum projects. As a result of the success of our first hackathon in September, we've continued growing our developer community and have seen outstanding development work.

Hackers were able to build subgraphs for their own dApps or build one of our requested subgraphs. To reward our hackers, up to 10,000 DAI is being given away in prizes to the top subgraphs. Each subgraph needed to meet submission requirements to be a high-quality subgraph and receive a prize. Prizes range from 500 - 2000 DAI based on the complexity of the code.

Over the three weeks, we've seen such great involvement from the community and great work that is directly contributing to the success of web3. Look out for info about future monthly hackathons!

In this hackathon, we saw 20 team registrations by 45 developers from developers all over the world, including Argentina, Australia, Brazil, Canada, Ecuador, France, Germany, India, Israel, Italy, Kenya, Romania, Russia, South Africa, Switzerland, the UK, and the US. We were highly impressed with the submissions and 12 teams are being rewarded for building high-quality subgraphs!

Winners are listed below in alphabetical order by subgraph name. Congrats to all the winners!

Bloom it, Graph it

Phil produced a subgraph for Bloom, an end-to-end protocol for decentralized identity and credit scoring. The Bloom it Graph it subgraph indexes different types of actions on Bloom identities (also called accounts). The subgraph allows for the querying of attestations based on identities, as well as querying for BLT balances associated with identities. In the demo app, the various clusters represent accounts.

Deacix and K06aa of the Crypto Maniacs team created a subgraph for 1inchexchange. Their **subgraph allows for the querying of limit order details and updates. These details include contract, maker and taker addresses as well as maker and taker amount and expiration. The demo app is a UI for limit swaps on 1inch exchange.

Mikael worked on a subgraph for Erascan, an Erasure Protocol explorer and playground. The Erascan subgraph allows users to look into the history and evaluate the credibility of certain claims by exploring the track record and recourse features. The demo app shows a feed of most recent claims and their authors.

Wip worked on he Giveth subgraph to index donation transactions within the Giveth dApp. In the donation explorer, each giver and receiver has their own focused view of their respective actions within the dApp. Among other useful information, the subgraph can also be queried for data on Donations, Givers and Tokens. 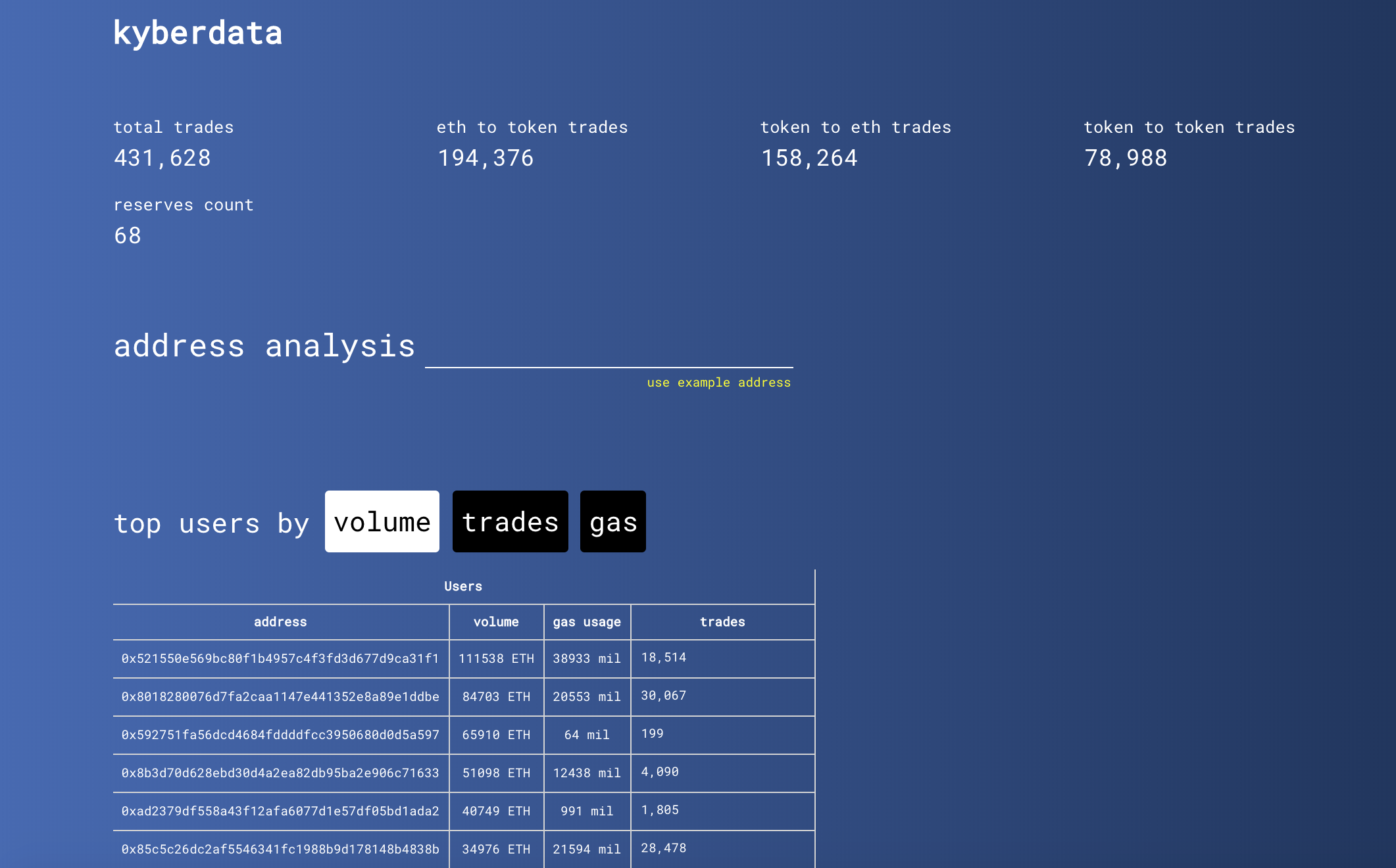 Mjc and Sudeep_aka_jupit3r313 teamed up to create a Kyber subgraph focusing on overall trading activity, user analysis and token analysis. In the kyberdata demo app you can see a ranking of top users by volume, trades and gas as well as aggregate statistics. 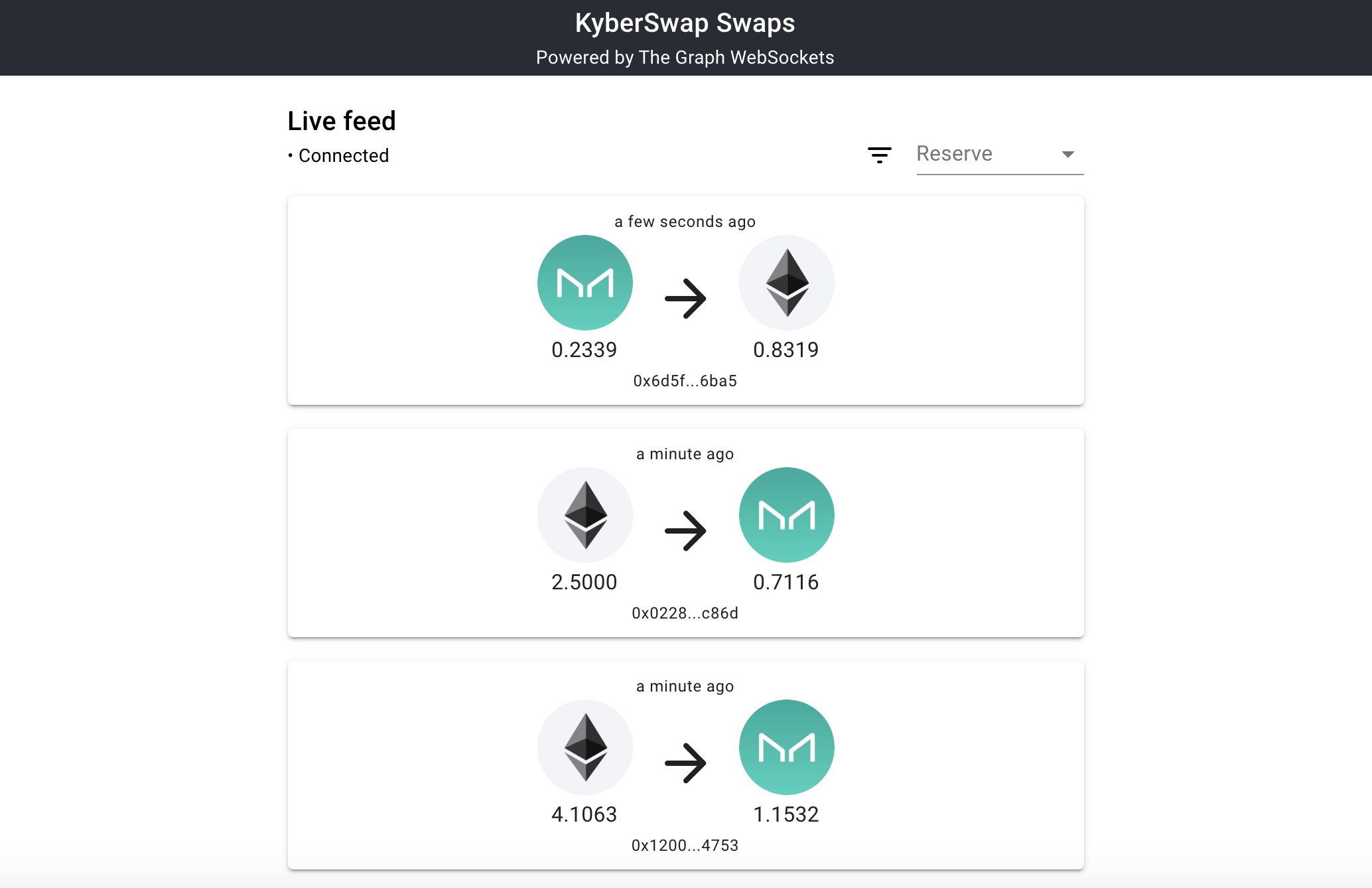 Caleb worked hard to build a Kyber subgraph focusing on liquidity pools (reserves), trades and users. The demo app tracks most recent swaps on Kyber, such as ETH for MKR tokens. 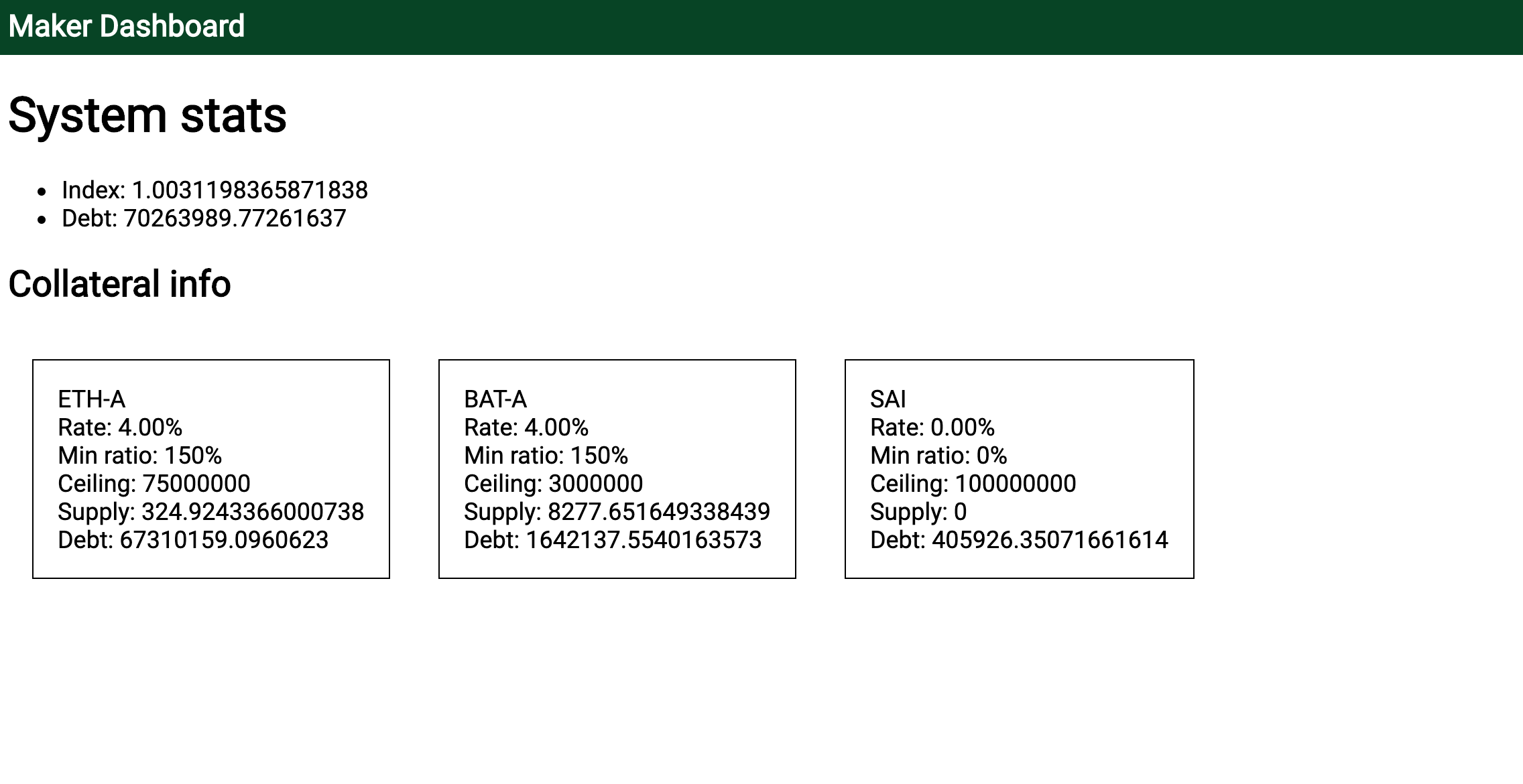 Timur built a great subgraph for Maker, providing a querying layer for the system overview, collateral types, DAI saving rate deposits and Vaults/CDPs. In the demo app you can see system stats as well as collateral info for ETH and BAT, and details about SAI.

Danielheyman and cipherGarden worked hard to build a subgraph for Nexus Mutual, a decentralised alternative to insurance. Their subgraph indexes nexus members, insured contracts, covers, stakes, votes, nx master contracts, claims, and votes and their front-end dApp allows for an easy and clear way to see the most useful information for each contract.

Amxx and pi0neerpat did a stellar job with the the front-end for this dApp, that's a fun visualization of rDAI pools, their outflows and account details. Their subgraph indexes and displays interest redistribution in the rDai network in visualised nodes. Clicking on each node displays further account information including addresses, balances, hats and loan owners. 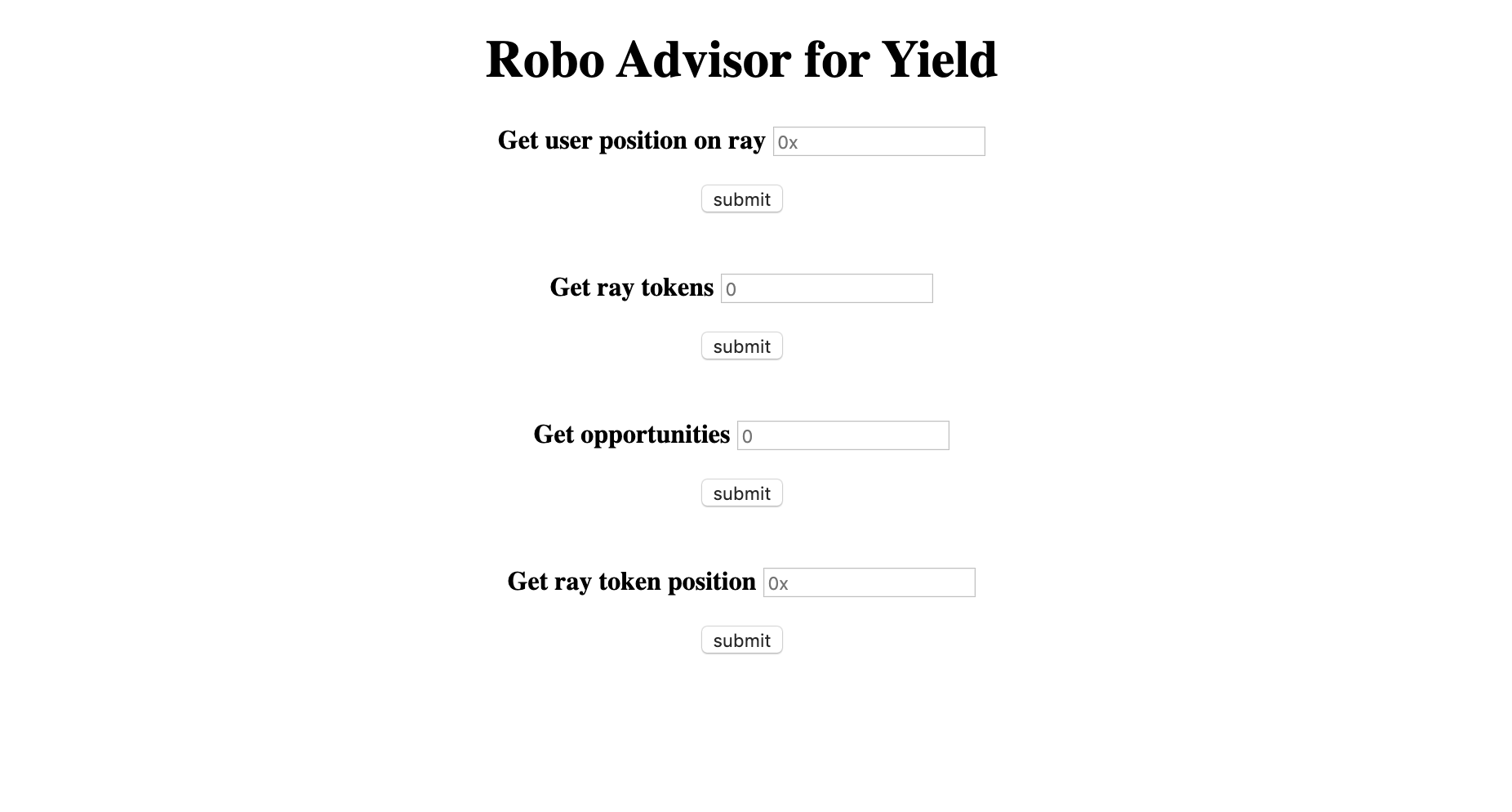 Nanspro built a subgraph for Robo-Advisor for Yield (RAY) that allows for useful querying of all user activities such as minting, depositing, withdrawing and burning on the RAY Protocol. The demo app lets users find the positions of other users, get RAY tokens, opportunities and token positions.

Jason Smythe built this subgraph to index the smart contracts of wildcards.world, a conservation tokens project based on ethereum. Among other useful data, this subgraph allows users to easily query data on the current and previous owners as well as current and historical price. Through the project's UI, users can contribute to sustaining wild life by purchasing wild cards.

DeeJay's Unchained Transactions subgraph offers an insight into marketplace transaction data by indexing event information from the 0x Exchange v2.1 contract as well as from the Gods Unchained ERC-721 token contract. This data is visualized as trends in price and volume over time. Check out the demo app to see historical transaction prices for all Gods Unchained cards.

Thanks to all hackathon participants for your submissions - we're indexing the web3 economy one step at a time!

Look out for future hackathons or you can deploy a subgraph anytime. Check out The Graph docs to learn how you can run a graph node, create a subgraph and query other subgraphs.