20 billion queries on The Graph’s hosted service in April represents an explosive rise in dapps and Web3 adoption.

Time moves like a jet plane when you are building a better internet and a new economy. The Graph’s hosted service has been serving dapps for over two years and has come so far from the early days at hackathons, helping the first set of developers build subgraphs. Today we celebrate 20 billion monthly queries on The Graph’s hosted service! That is 20x growth in less than a year, starting from 1 billion queries in June 2020 to 20 billion queries in April 2021! This growth has been driven by unprecedented usage of Ethereum and Web3. What has taken several years of building is now becoming a reality.

The Graph would not be anywhere without the strong community of builders that are committed to bringing decentralized applications (dapps) to the world. It has been a privilege to support innovative project teams with the hosted service, as they build out unique dapps, achieve product-market-fit, and gain user adoption.

Starting with a few queries in January 2019 to hitting approximately 30 million daily queries in June 2020, daily query volume in 2021 has continued to grow and has reached over 675 million queries per day. Between May 2020 to April 2021, over 110 billion queries were processed on The Graph’s hosted service. Query volume has also increased month-over-month (MoM) with 11.7B in January, 14.5B in February, 19B in March, and 20.3B in April, seeing 20% MoM average growth. 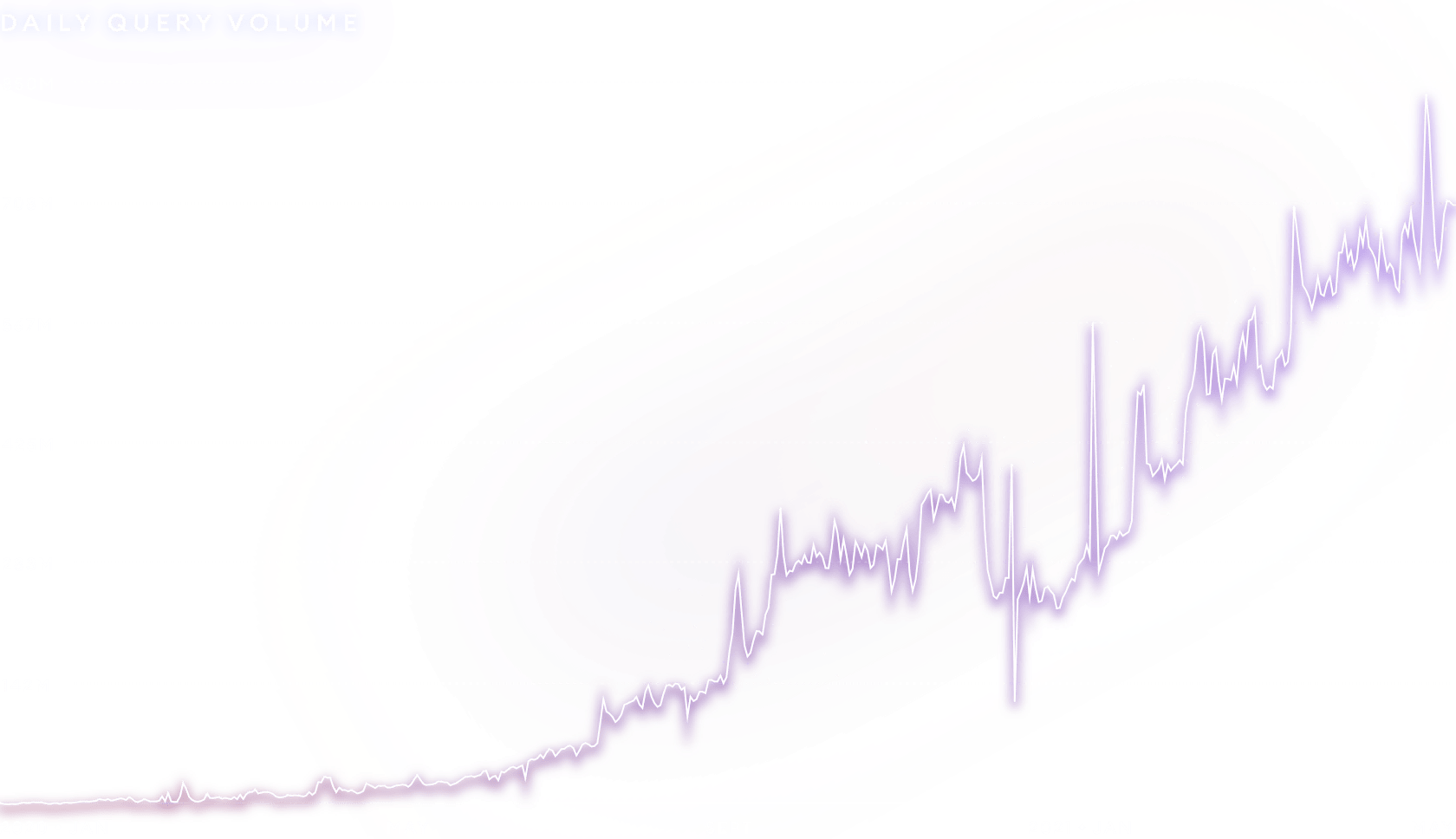 This month-over-month query growth is a strong proxy for Ethereum adoption and dapp product-market fit, which began accelerating during the DeFi summer in 2020 through to the rise of NFTs we have witnessed in 2021.

The Graph’s multi-blockchain expansion has also been actively contributing to this growth. To date there are 19 L1 and L2 blockchains supported on The Graph’s hosted service. 11 of these 19 networks were added over the past three months. Amongst those chains are EVM-based L1s, Ethereum, Fuse, Celo, Avalanche, Clover, Binance Smart Chain, and Fantom and L2s such as Polygon. Integration of these chains has contributed to the 20% MoM query growth on the hosted service and has been inspiring to witness as it represents a rise of dapps being built and used across the Ethereum ecosystem. The Graph is continuing its multi-blockchain expansion and will integrate Solana, NEAR, and Polkadot in the coming months for even more growth.

The next step is migrating this usage from The Graph's hosted service to the mainnet, where in the coming months over 170 Indexers and 6.5K Delegators will be able to capture GRT query fee value. Details on the three phases of migration are in The Graph’s migration path to mainnet blog.

Subgraphs play a critical role in Web3. As of Q1 2021, DeFi makes up 57% of queried subgraphs. Meanwhile, 11% of subgraphs serve NFT marketplaces, arts, and gaming. 7% of subgraphs are related to cross-chain use cases like synthetic bitcoin and protocol bridges, signifying an increase in interoperability between dapps.

Wallets, DAOs, and network analytics also remain common use cases for subgraphs. DAOs in particular are emerging as they serve other verticals like DeFi and NFTs. This indicates that as protocol usage has increased, so has participation in their governance and the creation of more dapps and tooling that enable decentralized decision making. 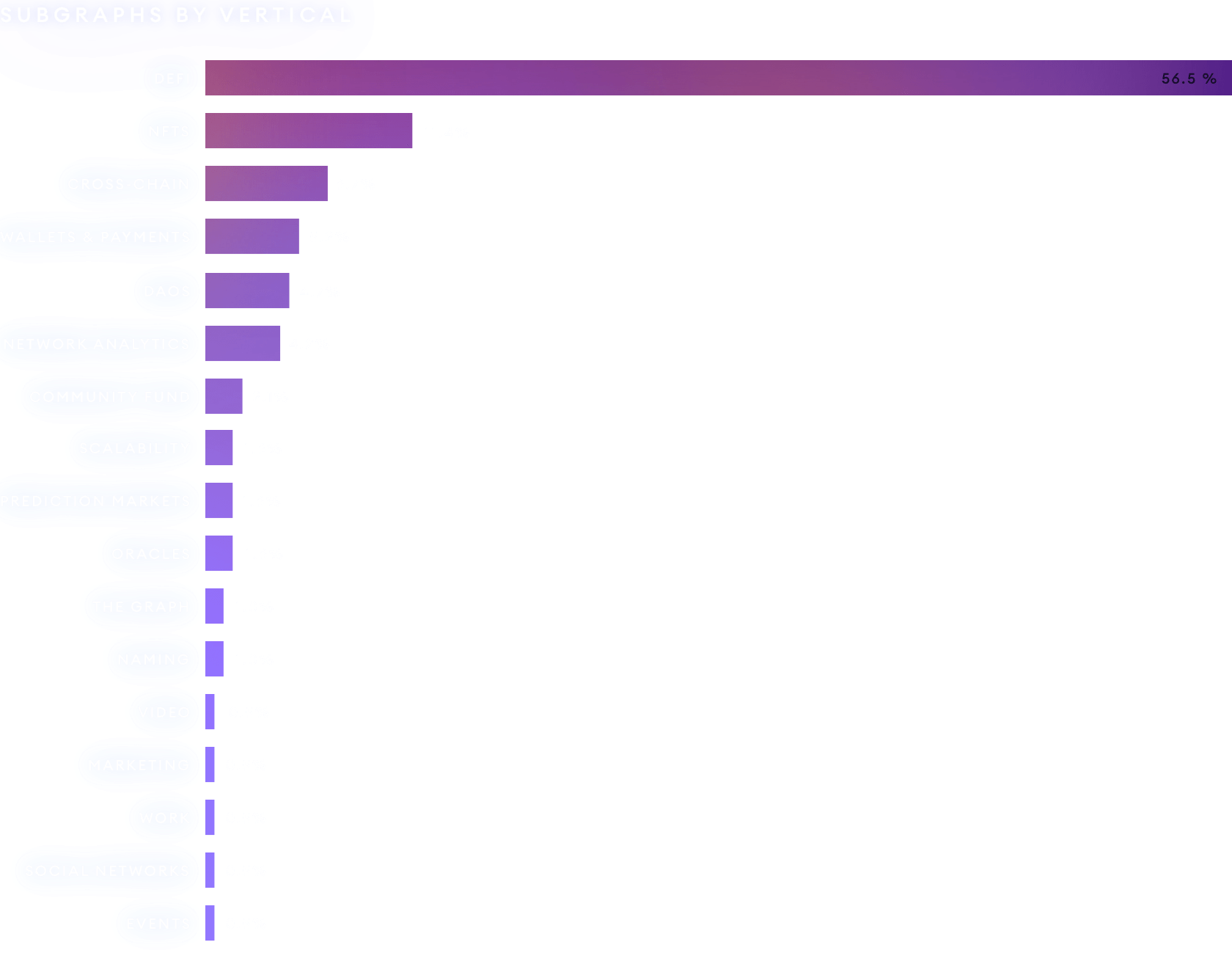 DeFi has continued to dominate dapp adoption, making up 90% of the hosted service query volume. AMM’s compose the majority of activity making up 88% of DeFi volume, while queries for stablecoin data made up 6%. Derivatives (eg. options), insurance and underwriter dapps also increased in popularity, implying the DeFi market is beginning to mature with more sophisticated assets and greater liquidity for complex financial services. Lending, asset management, and staking services are also seeing growing interest. Additionally, there’s an increasing trend of using network analytics subgraphs for apps like block explorers and graphing libraries for data-driven dapps like UIs for exchanges. Network-data focused subgraphs make up 4% of current query volume.

Query volume for NFT use cases like art profiles, NFT minting, and marketplaces has risen as several NFT protocols have launched new dapps in the last few months with increasing mainstream traction. NFTs make up 2.5% of current query volume. DAO adoption is also on the rise with more usage of DAO interfaces for DeFi governance, voting in new protocol assets, changing parameters, and making community funding decisions. Query data also shows an increase in the use of bridges to L2 scalability solutions on Ethereum, indicating that dapps are migrating quickly to viable EVM scaling solutions to ensure cheap transactions for their users. 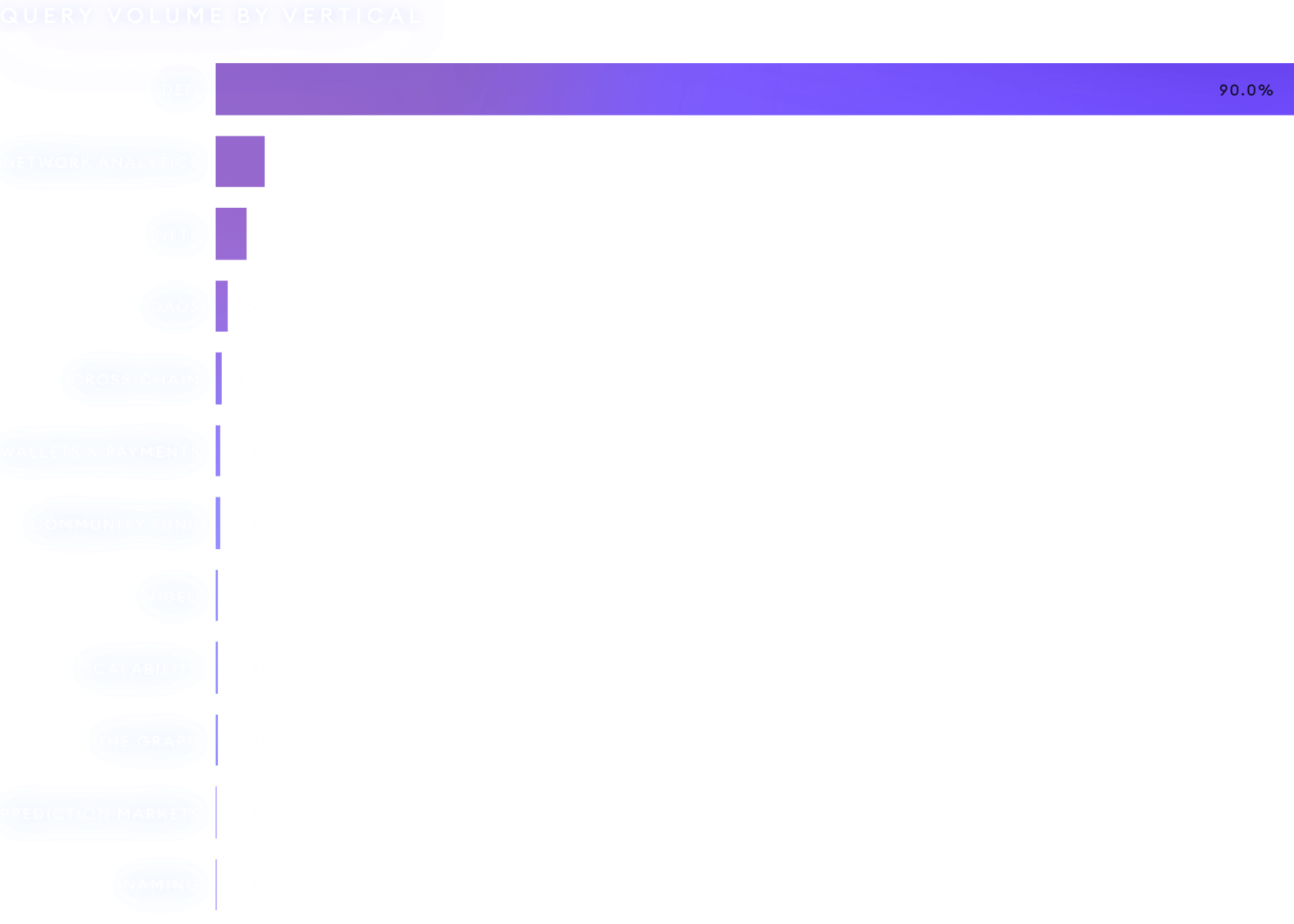 To date over 12K subgraphs have been deployed in the lifetime of the hosted service. Over 17K developers have built applications on The Graph, including the teams behind Uniswap, Synthetix, Gnosis, Balancer, Enzyme, Livepeer, DAOstack, Decentraland, and many others.

In January 2021 the hosted service had 8,273 subgraphs deployed and grew to 9,138 in February, followed by over 10K in March for a total lifetime of 12.6K subgraphs today. That’s 11% growth in subgraph deployment in just three months.

The amount of developers building on the hosted service also exhibits steadfast growth with over 11K in January, increasing to over 14K in February and 16K in March for a total of nearly 18K developers that have built on The Graph in its lifetime.

Subgraphs are a crucial component to build Web3 as they are the public data APIs that fuel dapps. Subgraphs are open APIs composed of the data developers require to build dapps and keep them running.

The Graph Foundation is focused on getting developers comfortable building on the mainnet, working with over 6.5K Delegators, 2K Curators, and more than 170 Indexers enabling a smooth migration.

The Graph is honored to be supporting the incredible builders of these dapps on their journey to mass adoption. Thank you to the builders, blockchains, Indexers, and the entire Web3 community who have made the growth of The Graph’s hosted service possible. We look forward to continuing to build a vibrant decentralized future together.

The Graph is the indexing and query layer of the decentralized web. Developers build and publish open APIs, called subgraphs, that applications can query using GraphQL. The Graph currently supports indexing data from Ethereum, IPFS, and PoA with more networks coming soon. To date, over 10,000 subgraphs have been deployed by ~16,000 developers for applications, such as Uniswap, Synthetix, Aragon, Gnosis, Balancer, Livepeer, DAOstack, AAVE, Decentraland, and many others.