Where are non-fungible tokens (NFTs) headed, what do they mean for the United Arab Emirates’s burgeoning crypto ecosystem, and what role does web3 infrastructure play in making these digital assets truly decentralized? These were just a few of the questions posed at the World NFT & DeFi Show conference in Dubai from September 23-24.

The event, which was hosted by global business solutions company VOSTAD, invited Edge & Node’s solutions engineer Pranav Maheshwari to give a keynote on the protocol and how it is revolutionizing the crypto space.

The conference was held in partnership with the Dubai Multi Commodities Centre (DMCC), with other partners including the Government Blockchain Association (GBA), Dubai Blockchain Center, The European Blockchain Association, and more. Keynote speakers included representatives from these organizations as well as executive leaders from USWAP, Aster Venture Capital, Polkabridge, TiENCHAT, and more. Several NFT artists also gave talks, and the event included a discussion on NFTs and the broader DeFi ecosystem. 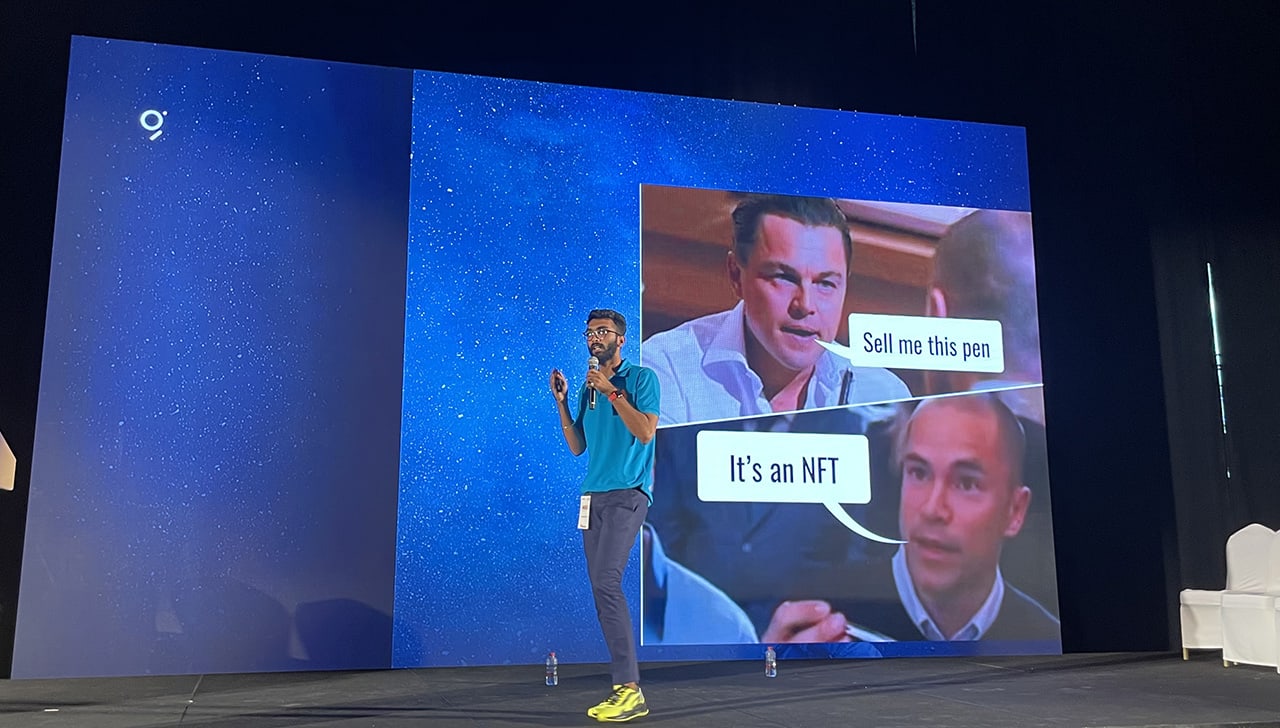 It has become nearly impossible to have a conversation today about the future of the internet without NFTs taking over a significant part of the conversation. NFTs, or non-fungible tokens, are units of data stored on a blockchain that prove a digital asset is unique and is not fungible, or interchangeable. These units of data can represent various types of digital files like audio, video, images, and more. NFTs have skyrocketed in popularity in recent months, with the number of creators, NFT projects, investors, and marketplaces growing every day.

Edge & Node's keynote primarily focused on how The Graph is web3 infrastructure revolutionizing the internet and how we store data. In particular, the talk emphasized the importance of NFTs being hosted on fully decentralized systems, because using a marketplace that runs on centralized infrastructure has similar drawbacks as a traditional web2 system.

In his talk, Maheshwari asked the audience to take a step back.

“I’ve talked to a lot of people today about NFTs but it’s important to talk about the fundamentals leading us to believe in the NFT space,” Maheshwari said in the keynote. “Why is the internet evolving into the web3 ecosystem, where NFTs occupy a very important and niche space?”

If one is building web3 infrastructure, the most important part is decentralization, but this is not possible if the individual is using central servers because there is a single point of failure.

Over the last 30 years, digital users have gone through several different versions of the web, all of which have represented different shifts in the way they create, consume, and get compensated for content.

According to Maheshwari, the rise of NFTs is further catalyzing the web3 revolution.

“We are creating a physical world in the digital space and it cannot happen without NFTs because NFTs bring the pact of scarcity to the web,” he said.

Maheshwari urged the audience to ensure that if they are creating an NFT and putting it out there, to do so in a trustless fashion, using decentralized infrastructure.

“It is not important to be the first, it is important to do it the right way. We are not in a rat race because we are creating the future of the internet. It has to have the ethos and values of democratization and decentralization of the internet,” Maheshwari said. “Anybody can create content. It’s not about content creation. Rather, it is about changing the way we own objects/property on the internet.”

“We cannot let anybody else own our digital space and that’s what web3 stands for. If you’re making something and it has an impact on the internet, it is something of value. NFTs are all about this: giving creators instead of a platform digital ownership,” Maheshwari added.

So what role does The Graph play in decentralizing the way NFTs are created, owned, and shared?

The Graph is the indexing and query layer of the decentralized web. If an entity wants to create an NFT marketplace, it can use the protocol to ensure the digital assets are owned in a truly decentralized manner. The Graph acts as a middle layer between the blockchain data and the front end. It serves the information to the front end of NFTs – marketplaces and metaverses from the blockchain using GraphQL APIs. Though The Graph is working to add additional features, the protocol is currently being used by many NFT dapps like Artblocks, Decentraland, and Zora to name a few.

The Graph is the indexing and query layer of the decentralized web (Web3). Developers build and publish open APIs, called subgraphs, that applications can query using GraphQL. The Graph currently supports indexing data from 22 different networks including Ethereum, Arbitrium, Avalanche, Celo, Fantom, Moonbeam, IPFS, and PoAa with more networks coming soon. To date, over 22,000 subgraphs have been deployed on the hosted service and now subgraphs can be deployed directly on the network! Over 23,000 developers have built subgraphs for applications, such as Uniswap, Synthetix, Foundation, Zora, KnownOrigin, Gnosis, Balancer, Livepeer, DAOstack, Audius, Decentraland, and many others.