Delegators are network participants who delegate (i.e., "stake") GRT to one or more Indexers. Delegators contribute to securing the network without running a Graph Node themselves.

Delegator Guide#Link to this section

This guide will explain how to be an effective Delegator in the Graph Network. Delegators share earnings of the protocol alongside all Indexers based on their delegated stake. A Delegator must use their best judgment to choose Indexers based on multiple factors. Please note this guide will not go over steps such as setting up Metamask properly, as that information is widely available on the internet. There are three sections in this guide:

Delegation Risks#Link to this section

Listed below are the main risks of being a Delegator in the protocol.

The delegation tax#Link to this section

Delegators cannot be slashed for bad behavior, but there is a tax on Delegators to disincentivize poor decision-making that could harm the integrity of the network.

It is important to understand that every time you delegate, you will be charged 0.5%. This means if you are delegating 1000 GRT, you will automatically burn 5 GRT.

This means that to be safe, a Delegator should calculate what their return will be by delegating to an Indexer. For example, a Delegator might calculate how many days it will take before they have earned back the 0.5% tax on their delegation.

The delegation unbonding period#Link to this section

Whenever a Delegator wants to undelegate, their tokens are subject to a 28-day unbonding period. This means they cannot transfer their tokens, or earn any rewards for 28 days.

One thing to consider as well is choosing an Indexer wisely. If you choose an Indexer who was not trustworthy, or not doing a good job, you will want to undelegate, which means you will be losing a lot of opportunities to earn rewards, which can be just as bad as burning GRT. 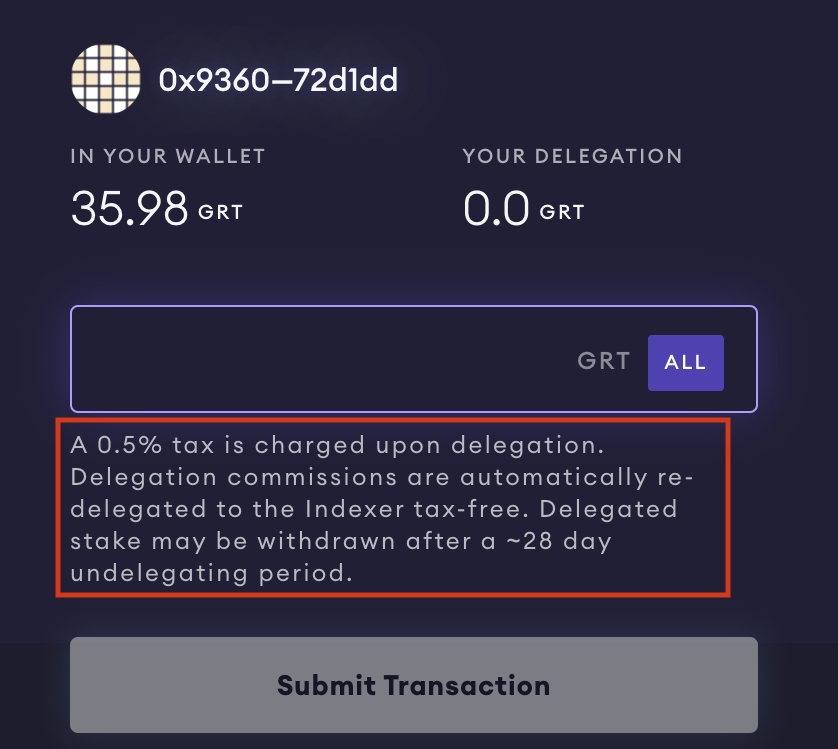 Note the 0.5% fee in the Delegation UI, as well as the 28 day unbonding period.

This is an important part to understand. First let's discuss three very important values, which are the Delegation Parameters.

Indexing Reward Cut - The indexing reward cut is the portion of the rewards that the Indexer will keep for themselves. That means if it is set to 100%, as a Delegator you will get 0 indexing rewards. If you see 80% in the UI, that means as a Delegator, you will receive 20%. An important note - at the beginning of the network, Indexing Rewards will account for the majority of the rewards.

As you can see, there is a lot of thought that must go into choosing the right Indexer. This is why we highly recommend you explore The Graph Discord to determine who the Indexers are with the best social reputation, and technical reputation, to reward Delegators consistently. Many of the Indexers are very active in Discord and will be happy to answer your questions. Many of them have been Indexing for months in the testnet, and are doing their best to help Delegators earn a good return, as it improves the health and success of the network.

A Delegator has to consider a lot of factors when determining the return. These include:

As described in the above sections, you should choose an Indexer that is transparent and honest about setting their Query Fee Cut and Indexing Fee Cuts. A Delegator should also look at the Parameters Cooldown time to see how much of a time buffer they have. After that is done, it is fairly simple to calculate the amount of rewards the Delegators are getting. The formula is:

A Delegator can therefore do the math to determine that the Indexer offering 20% to Delegators, is offering a better return.

Considering the delegation capacity#Link to this section

Therefore a Delegator should always consider the Delegation Capacity of an Indexer, and factor it into their decision making.

Delegator FAQs and Bugs#Link to this section

When I try to delegate my transaction in MetaMask appears as "Pending" or "Queued" for longer than expected. What should I do?

At times, attempts to delegate to indexers via MetaMask can fail and result in prolonged periods of "Pending" or "Queued" transaction attempts. For example, a user may attempt to delegate with an insufficient gas fee relative to the current prices, resulting in the transaction attempt displaying as "Pending" in their MetaMask wallet for 15+ minutes. When this occurs, subsequent transactions can be attempted by a user, but these will not be processed until the initial transaction is mined, as transactions for an address must be processed in order. In such cases, these transactions can be cancelled in MetaMask, but the transactions attempts will accrue gas fees without any guarantee that subsequent attempts will be successful. A simpler resolution to this bug is restarting the browsesr (e.g., using "abort:restart" in the address bar), which will cancel all previous attempts without gas being subtracted from the wallet. Several users that have encountered this issue and have reported successful transactions after restarting their browser and attempting to delegate.

Video guide for the network UI#Link to this section

This guide provides a full review of this document, and how to consider everything in this document while interacting with the UI.