Tokenomics of The Graph Network

The Graph is a decentralized protocol that enables easy access to blockchain data. It's similar to a B2B2C model, except it is powered by a decentralized network of participants. Network participants work together to provide data to end users in exchange for GRT rewards. GRT is the work utility token that coordinates data providers and consumers. GRT serves as a utility for coordinating data providers and consumers within the network and incentivizes protocol participants to organize data effectively.

By using The Graph, users can easily access data from the blockchain, paying only for the specific information they need. The Graph is used by many popular applications in the web3 ecosystem today.

The Graph plays a crucial role in making blockchain data more accessible and enabling a marketplace for its exchange.

The Roles of Network Participants#Link to this section

There are four primary network participants:

Fishermen and Arbitrators are also integral to the network’s success through other contributions, supporting the work of the other primary participant roles. For more information about network roles, read this article. Indexers are delegated GRT by Delegators increasing the Indexer’s stake in subgraphs on the network. In return, Delegators earn a percentage of all query fees and indexing rewards from the Indexer. Each Indexer sets the cut that will be rewarded to Delegators independently, creating competition among Indexers to attract Delegators. Most Indexers offer between 9-12% annually.

For example, if a Delegator were to delegate 15k GRT to an Indexer offering 10%, the Delegator would receive ~1500 GRT in rewards annually.

There is a 0.5% delegation tax which is burned whenever a Delegator delegates GRT on the network. If a Delegator chooses to withdraw their delegated GRT, the Delegator must wait for the 28-epoch unbonding period. Each epoch is 6,646 blocks, which means 28 epochs ends up being approximately 26 days.

If you're reading this, you're capable of becoming a Delegator right now by heading to the network participants page, and delegating GRT to an Indexer of your choice.

Curators (Earn GRT)#Link to this section

Curators identify high-quality subgraphs, and "curate" them (i.e., signal GRT on them) to earn curation shares, which guarantee a percentage of all future query fees generated by the subgraph. While any independent network participant can be a Curator, typically subgraph developers are among the first Curators for their own subgraphs because they want to ensure their subgraph is indexed.

As of December 2022, subgraph developers are encouraged to curate their subgraph with at least 10,000 GRT. However, this number may be impacted by network activity and community participation.

Curators pay a 1% curation tax when they curate a new subgraph. This curation tax is burned, decreasing the supply of GRT.

Creating a subgraph#Link to this section

Developers can create a subgraph to index data on the blockchain. Subgraphs are instructions for Indexers about which data should be served to consumers.

Querying an existing subgraph#Link to this section

Once a subgraph is published to The Graph's decentralized network, anyone can create an API key, add GRT to their billing balance, and query the subgraph.

Subgraphs are queried using GraphQL, and the query fees are paid for with GRT in Subgraph Studio. Query fees are distributed to network participants based on their contributions to the protocol.

1% of the query fees paid to the network are burned.

Indexers (Earn GRT)#Link to this section

Indexers are the backbone of The Graph. They operate independent hardware and software powering The Graph’s decentralized network. Indexers serve data to consumers based on instructions from subgraphs.

Each subgraph is allotted a portion of the total network token issuance, based on the amount of the subgraph’s curation signal. That amount is then rewarded to Indexers based on their allocated stake on the subgraph.

In order to run an indexing node, Indexers must stake 100,000 GRT or more with the network. Indexers are incentivized to stake GRT in proportion to the amount of queries they serve.

Indexers can increase their GRT allocations on subgraphs by accepting GRT delegation from Delegators, and they can accept up to 16 times their initial stake. If an Indexer becomes "over-delegated" (i.e., more than 16 times their initial stake), they will not be able to use the additional GRT from Delegators until they increase their stake in the network.

The amount of rewards an Indexer receives can vary based on the initial stake, accepted delegation, quality of service, and many more factors. The following chart is publicly available data from an active Indexer on The Graph's decentralized network.

The Indexer stake & reward of allnodes-com.eth#Link to this section 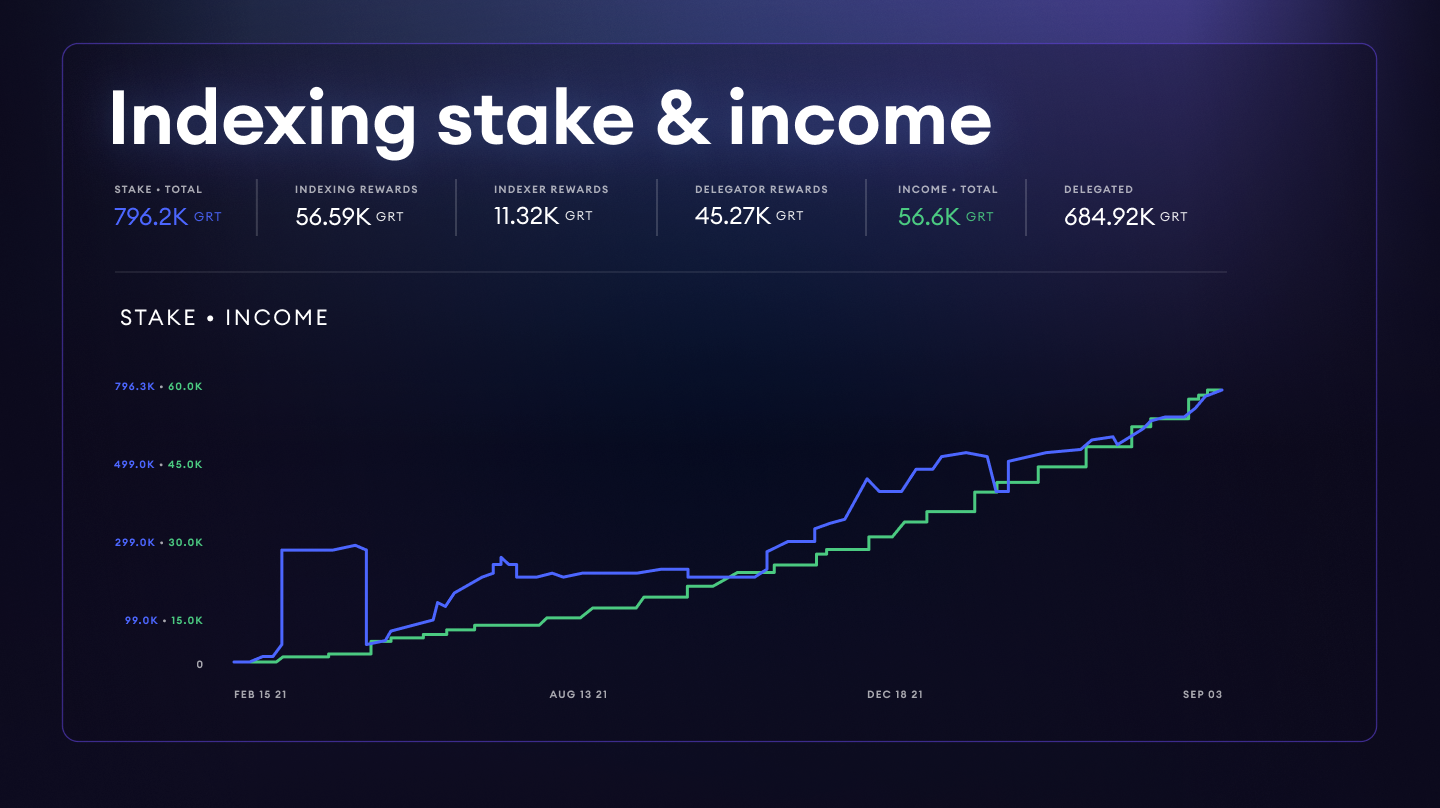 Please note, this will improve when the Arbitrum migration is complete, making gas costs a significantly lower burden for participating on the network.

The initial token supply is 10 billion GRT, with a target of 3% new issuance annually to reward Indexers for allocating stake on subgraphs. This means that the total supply of GRT tokens will increase by 3% each year as new tokens are issued to Indexers for their contribution to the network.

The Graph is designed with multiple burning mechanisms to offset new token issuance. Approximately 1% of the GRT supply is burned annually through various activities on the network, and this number has been increasing as network activity continues to grow. These burning activities include a 0.5% delegation tax whenever a Delegator delegates GRT to an Indexer, a 1% curation tax when Curators signal on a subgraph, and a 1% of query fees for blockchain data. 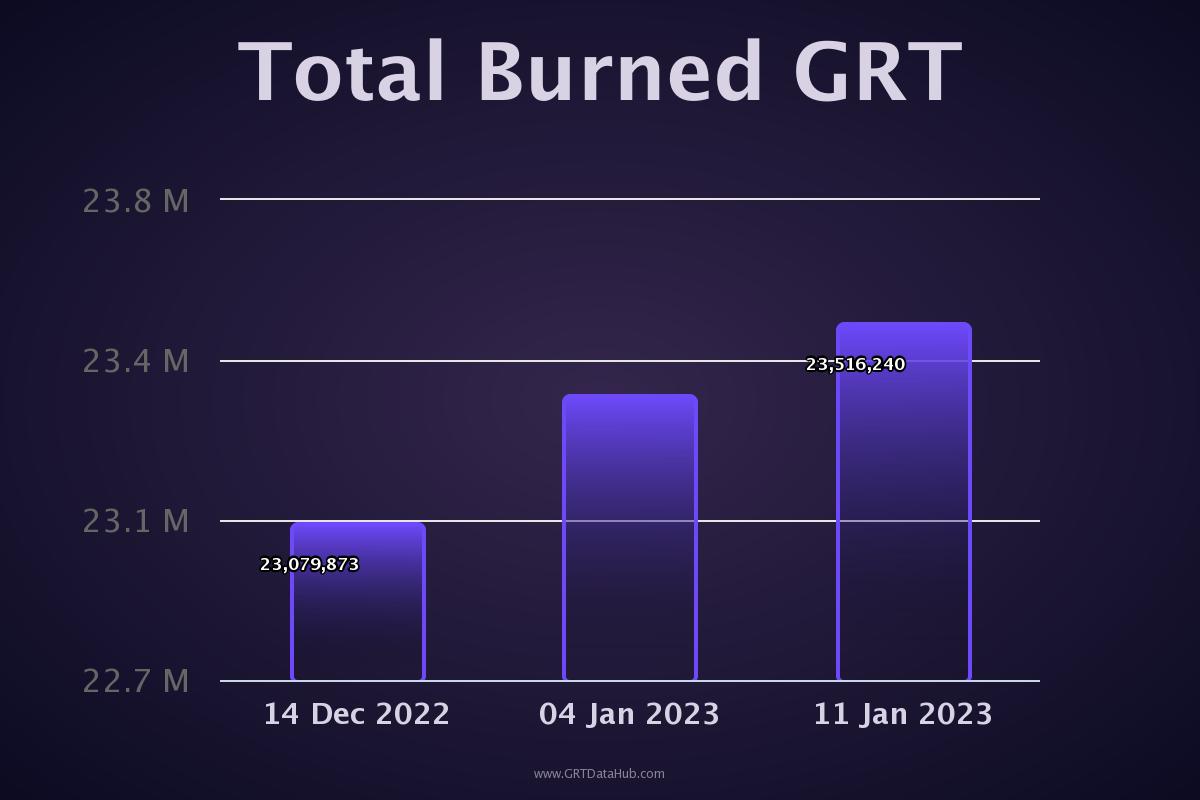 In addition to these regularly occurring burning activities, the GRT token also has a slashing mechanism in place to penalize malicious or irresponsible behavior by Indexers. If an Indexer is slashed, 50% of their indexing rewards for the epoch are burned (while the other half goes to the fisherman), and their self-stake is slashed by 2.5%, with half of this amount being burned. This helps to ensure that Indexers have a strong incentive to act in the best interests of the network and to contribute to its security and stability.

Improving the Protocol#Link to this section

The Graph Network is ever-evolving and improvements to the economic design of the protocol are constantly being made to provide the best experience for all network participants. The Graph Council oversees protocol changes and community members are encouraged to participate. Get involved with protocol improvements in The Graph Forum.